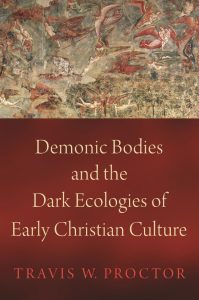 Travis W. Proctor, a 2017 PhD graduate of our department, has recently published his first book, Demonic Bodies and the Dark Ecologies of Early Christian Culture:

Drawing insights from gender studies and the environmental humanities, Demonic Bodies analyzes how ancient Christians constructed the Christian body through its relations to demonic adversaries. Case studies on New Testament texts, early Christian church fathers, and “Gnostic” writings trace how early followers of Jesus construed the demonic body in diverse and sometimes contradictory ways, as both embodied and bodiless, “fattened” and ethereal, heavenly and earthbound. Across this diversity of portrayals, however, demons consistently functioned as personifications of “deviant” bodily practices such as “magical” rituals, immoral sexual acts, gluttony, and “pagan” religious practices. This demonization served an exclusionary function where by Christian writers marginalized fringe Christian groups by linking their ritual activities to demonic modes of (dis)embodiment. Demonic Bodies demonstrates, therefore, that the formation of early Christian cultures was part of the shaping of broader Christian “ecosystems,” which in turn informed Christian experiences of their own embodiment and community.

Travis W. Proctor is Assistant Professor of Religion at Wittenberg University. He received his M.A. and Ph.D. in Ancient Mediterranean Religions from the University of North Carolina at Chapel Hill. His research has appeared in the Journal of Early Christian Studies, Harvard Theological Review, Studies in Late Antiquity, and Journal of Ecclesiastical History, as well as public venues including Religion Dispatches, The Bart Ehrman Blog, and the “Tell Me Something I Don’t Know” podcast.


(Updated April 3, 2022)
Check out our Fall 2022 Course Posters below! Note that class times and locations may be subject to changes. Please check our Fall 2022 Schedule and ConnectCarolina for the most up-to-date information.


(Updated April 2, 2022)
Here are the courses we are offering for the Summer 2022 semester! Note that class times and locations may be subject to changes. Please check our Summer 2022 Schedule and ConnectCarolina for the most up-to-date information.


The pandemic has changed ways that some Jews and Christians practice their faith, says a Carolina religious studies expert. For some worshippers, a starry night sky has replaced the ceiling of a synagogue or church building.

Congregating outside is just one way that the pandemic has forced many Jews and Christians to alter how they commune and practice their religion. Some changes will remain, says Evyatar Marienberg, associate professor in the religious studies department in the College of Arts & Sciences and director of the minor program in Christianity and culture. His research interests include contemporary Catholicism, the social history of Jews and Christianity in Medieval Europe and rabbinics.

You’ve thought about how world events affect religious practices. What is different or the same about the pandemic’s effects?

When 9/11 happened, for instance, people talked about going more often to churches. I remember telling myself, This will pass. People need some comfort that religions can sometimes provide, but it is temporary. It will pass and nothing will change significantly with regard to religious practices. I believe that was the reality. The pandemic is different because it’s so long. Two years have gone by.

Take, for example, the issue of actively being in a place of worship. Before COVID-19, it was unthinkable for many people and religious groups to have their services in any way other than going to and being in their place of worship. That’s not the case anymore. Suddenly, things that were obvious became not obvious at all.

The impact is not the same for all. For some groups, this didn’t pose big theological, doctrinal or legal problems. Their service’s center was words, sermons, homilies or watching someone doing something. To do it online was not a tectonic shift.

For others, it was big. For Catholics, for whom the central part of worship is physical — the Eucharist, taking consecrated bread, drinking consecrated wine — this situation created a problem. Not going to service without a good reason is a sin, but not a severe one. But the clergy told them not to go. They had to make it work by proceeding online or by drive-in or being distanced. They created new prayers, new rituals and continued with this for an extended period. Even though now people do go back, it’s clear to all that nontraditional ways of attending services have been legitimized.

Were some practices, such as using one cup for communion, problematic?

Yes. The most extreme example I know of happened in Greece, in the Orthodox Church. There was at the pandemic’s beginning serious denial of COVID-19 and its risks. One Greek bishop who insisted on people using the same spoon for taking bread and wine died from COVID.

To read the remainder of this article, please click here! 
William Jay Peck taught in the Department of Religious Studies from 1970 until his retirement in 1994.

The child of missionaries in rural Guatemala, Bill was homeschooled until age 13. The Guatemala highlands, and the language and culture of Mam Maya people, remained a lifelong research and humanitarian interest.

Bill received his BA from Yale University. After completing a theology degree from Princeton University in 1954 he was ordained in the Presbyterian Church and worked as a pastor for three years in the coal districts around Weatherly PA. This experience led his to PhD studies at Harvard University, which he completed in 1962.

At UNC, Bill quickly became a figure of profound importance both in Religious Studies and in the larger university community. He was a teacher of influence and renown, to this day he is remembered for his powerful lectures during the Vietnam War era. He was a quiet but influential voice in the emerging Chapel Hill antiwar underground, providing a philosophically rigorous and theologically inflected language around which the cautious but searching students of those years could coalesce. He is lovingly remembered by generations of former students for the principled social ethics he developed in his lectures during that time.

Bill’s lectures were informed by his philosophical interests, principally the work of Dietrich Bonhoeffer, to which he devoted a lifetime of research. He was committed to the study of the Reformation, especially the work of Luther and Calvin. In modern philosophy, he studied and taught Kant, Hegel, Kierkegaard, Schleiermacher, Tillich, and Barth. He often focused this study through the lens of the psychology of religion. In the Department of Religious Studies, the concentrations of Religion and Culture and Religion in the Americas owe much to Bill’s unyielding philosophical curiosity.

In his later career, Bill took an interest in anthropological approaches to religion, and shamanism became a central concern of his. His courses on shamanism became a point of extraordinary contact with the generation of undergraduates who were adrift in the misanthropic political and economic milieu of the 1980s and 1990s. For twenty summers, Bill led groups of these students to the Guatemalan highlands, introducing many of them to the wonders of Mam Maya culture.

When Bill retired, his friends and colleagues established a fund in his name to support excellence among graduate student teachers. This was of utmost importance to Bill, such that long after his retirement, he passionately engaged graduate students on questions of teaching at every opportunity. The fund named for him continues to inspire graduate student teaching in the Department of Religious Studies.

Posted in News & Events on December 19, 2021
Webinar on Dune and Islam: How To Understand the Movie


Frank Herbert’s Dune is inspired by themes from the history of Islam that are both direct and subtle. Carl Ernst and Michael Muhammad Knight discussed the new film and the book’s relationship to Islam. This event took place on November 13, 2021.

Carl Ernst is a leading scholar of Islamic Studies and Sufism and William R. Kenan, Jr., Distinguished Professor in the Department of Religious Studies at UNC Chapel Hill. Michael Muhammad Knight is Assistant Professor of Religion and Cultural Studies at the University of Central Florida and the author of several books, most recently Muhammad’s Body: Baraka Networks and the Prophetic Assemblage.

The live webinar was a fundraiser to benefit the Peck Fund for Teaching Excellence, which is devoted to supporting and recognizing teaching among graduate students in the Department of Religious Studies at UNC-Chapel Hill.


In this webinar, Professor Bart Ehrman discussed his new project on the book of Revelation and expectations of Armageddon. Professor Ehrman talked about historical misrepresentations of the Book of Revelation, especially by evangelical Christian communities in the United States over the last one hundred years. His talk focused on evangelical accounts of the impending end of the world, Armageddon, and the wrath of a vengeful God. He asked, how do New Testament themes of tolerance and forgiveness fare in these accounts?

As faculty in the Department of Religious Studies, we are committed to Carolina’s mission:

The University of North Carolina at Chapel Hill, the nation’s first public university, serves North Carolina, the United States, and the world through teaching, research, and public service. We embrace an unwavering commitment to excellence as one of the world’s great research universities.

As trustees, you have been charged with fulfilling this mission and upholding this standard of excellence.

The failure to consider the tenure of Nikole Hannah-Jones harms the university’s reputation and its ability to attract and retain the best and brightest faculty to serve the people of this state. As a consequence, UNC Chapel Hill will not be able to maintain its excellence as one of the world’s great research universities. We call on you to fulfill your obligation as trustees and immediately vote upon the recommendation of this university to offer Hannah-Jones a tenured position as the Knight Chair in the Hussman School of Journalism and Media.

We are also concerned that your failure to act will negatively affect our students. The university’s mission statement explicitly values the diversity of our student body and our state:

Our mission is to serve as a center for research, scholarship, and creativity and to teach a diverse community of undergraduate, graduate, and professional students to become the next generation of leaders.

We embrace this challenge daily. Our students benefit when everyone is empowered to reach their potential and contribute to the common good. The perceived politicization of education undermines inclusion and limits our ability to fulfill this commitment to the people of North Carolina.

We endorse the Chair of the Faculty’s June 19th letter, which explains that faculty governance of the tenure process is essential to maintaining academic integrity. Academic freedom has been defined as having two principles: freedom from political or religious control, and shared governance of institutions. The faculty of the University of North Carolina at Chapel Hill needs to know that the Board of Trustees agrees with these principles. Anything less than that will irreparably damage the confidence of the faculty in the ability of the Board of Trustees to safeguard the future of this university.

It is imperative that the Board of Trustees immediately confirm the Provost’s recommendation to offer Hannah-Jones a tenured position.

The Chair of our department, Prof. Barbara Ambros, has also written an individual letter to the Board of Trustees, which can be viewed here.