Bart Ehrman on “Faith in Our Lives: Why We Follow” and “The Triumph of Christianity” 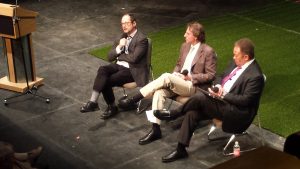 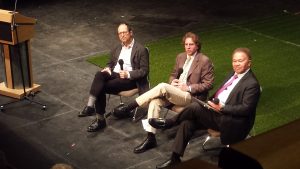 The latest book by Carl Ernst, Kenan Distinguished Professor of Religious Studies, is a volume of his essays titled It’s Not Just Academic! Essays on Sufism and Islamic Studies (Sage, 2017). From the Sage Publishing website:

“This collection of articles by Carl W. Ernst summarizes over 30 years of research, recovering and illuminating remarkable examples of Islamic culture that have been largely overlooked, if not forgotten. It opens with reflections on teaching Islam, focusing on major themes such as Sufism, the Qur’an, the Prophet Muhammad, and Arabic literature. The importance of public scholarship and the questionable opposition between Islam and the West are also addressed. The articles that follow explore multiple facets of Sufism, the ethical and spiritual tradition that has flourished in Muslim societies for over a thousand years. The cumulative effect is to move away from static Orientalist depictions of Sufism and Islam through a series of vivid and creative case studies.” 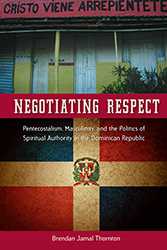 Professor Brendan Thornton’s book, Negotiating Respect: Pentecostalism, Masculinity, and the Politics of Spiritual Authority in the Dominican Republic (University Press of Florida, 2016), has won the 2017 Barbara Christian Prize for Best Book in the Humanities from the Caribbean Studies Association. From the comments of one of the judges on the prize committee:

“I cannot assert strongly enough the groundbreaking moves made in Negotiating Respect. Thornton challenges our now settled critical orthodoxies as what counts as radical and subversive scholarship by taking seriously the diverse practices of Caribbean Christianity…. The stakes for the field of Caribbean studies are high. Thornton asks us to complicate our reading of quotidian religious practices: so, that we might see that ‘the church has become more norm than exception, more local than foreign, more orthodox than heterodox, more accepted than disdained.’” The latest book by Randall Styers, Associate Professor and Chair of the Department of Religious Studies, is a volume of collected essays (co-edited with Edward Bever of SUNY Old Westbury) titled Magic in the Modern World: Strategies of Repression and Legitimization (Pennsylvania State University Press, 2017). In addition to co-editing the entire volume, Prof. Styers contributes an essay to the collection on “Bad Habits, or, How Superstition Disappeared in the Modern World.” From the Penn State University Press website:

“This collection of essays considers the place of magic in the modern world, first by exploring the ways in which modernity has been defined in explicit opposition to magic and superstition, and then by illuminating how modern proponents of magic have worked to legitimize their practices through an overt embrace of evolving forms such as esotericism and supernaturalism.

“Taking a two-track approach, this book explores the complex dynamics of the construction of the modern self and its relation to the modern preoccupation with magic. Essays examine how modern ‘rational’ consciousness is generated and maintained and how proponents of both magical and scientific traditions rationalize evidence to fit accepted orthodoxy. This book also describes how people unsatisfied with the norms of modern subjectivity embrace various forms of magic—and the methods these modern practitioners use to legitimate magic in the modern world.”

The volume also includes a contribution by one of our PhD alumni, Megan Goodwin, titled “Manning the High Seat: Seidr as Self-Making in Contemporary Norse Neopaganisms.”

Syndicate Network, an online forum for facilitating conversations on topics in the humanities, is currently hosting an online symposium on Prof. David Lambert’s award-winning book, How Repentance Became Biblical: Judaism, Christianity, and the Interpretation of Scripture (Oxford University Press, 2016).

The symposium consists of critical reviews of the book by four scholars of different theoretical perspectives, with subsequent responses by Prof. Lambert leading to further back-and-forth dialogue. This format allows for an in-depth, illuminating exploration of the many issues that the book raises.

The online symposium can be found here. Currently the site has posted the responses of Joel Kaminsky (Smith College) and Susanne Scholz (Southern Methodist University); the responses of Reed Carlson (Harvard Divinity School) and Jeffrey Stackert (University of Chicago) are still to come.


Professor Joseph Lam recently did an interview with Benjamin Perry on MeaningOfLife.tv regarding his book, Patterns of Sin in the Hebrew Bible: Metaphor, Culture, and the Making of a Religious Concept (Oxford University Press, 2016). They discussed a variety of topics, including the “life” and “death” of metaphors, ancient vs. modern notions of sin, and the role of metaphor in contemporary religious and public discourse. Watch the video below:

To view the video on the MeaningOfLife.tv site, click here.

The most recent popular book by Bart Ehrman, James A. Gray Distinguished Professor in Religious Studies, is Jesus Before the Gospels: How the Earliest Christians Remembered, Changed, and Invented Their Stories of the Savior (HarperOne, 2016). In the book, Prof. Ehrman examines the role of memory in the earliest transmission of stories about the historical Jesus.

For an extensive two-part debate (hosted by the “Unbelievable?” radio program) with Richard Bauckham on the relationship of the New Testament Gospels to eyewitness testimony, see the following links: [part 1] [part 2]

The following is a 28-minute interview (with the American Freethought podcast) in which Prof. Ehrman discusses some of the main points of the book (the actual interview begins at the 2:44 mark; see also YouTube):

Posted in Faculty Publications on October 4, 2016

“The essays explore Sufism as it developed in the Indian subcontinent, including translations of previously unavailable texts, and revealing unexpected insights into the lives, practices, and teachings of Indian Muslims over nearly a thousand years. They also trace remarkable moments in the history of Muslim engagement with Indian religious and cultural practices. This includes not only Muslim participation in Indian art and literature, but also the extraordinary role that Sufis have played in the practice of yoga. Employing new approaches to religious studies that avoid essentialism and ideological concepts of religion, and shorn of unnecessary jargon, these compelling essays will be easily accessible to a larger audience.”

Posted in Faculty Publications on September 29, 2016
Lauren Leve: The Buddhist Art of Living in Nepal

Lauren Leve, Associate Professor in the Department of Religious Studies, has just published a new book, The Buddhist Art of Living in Nepal: Ethical Practice and Religious Reform (Routledge, 2016), as part of the Routledge Critical Studies in Buddhism series. From the Routledge website:

“Theravada has experienced a powerful and far-reaching revival, especially among the Newar Buddhist laity, many of whom are reorganizing their lives according to its precepts, practices and ideals. This book documents these far-reaching social and personal transformations and links them to widespread political, economic and cultural shifts associated with late modernity, and especially neoliberal globalization.” Earlier this year, while on research leave, Jessica Boon published a new co-edited collection of the visionary sermons of the Spanish mystic Mother Juana de la Cruz (1481–1534). In addition to co-editing the entire volume, Professor Boon contributed an introduction and a set of explanatory notes to the sermon translations. From the Arizona Center for Medieval & Renaissance Studies website:

“Juana de la Cruz (1481–1534) is a unique figure in the history of the Catholic Church, thanks to her public visionary experiences during which she lost consciousness, while a deep voice, identifying itself as Christ, issued from her, narrating the feasts and pageants taking place in heaven. Juana’s so called ‘sermons,’ collected in a manuscript called Libro del Conorte, form a fascinating window into Castilian religiosity in the early sixteenth century. There is much to reap from these sermons concerning Spanish Renaissance culture, theology, mysticism, gender roles, and interreligious interactions.”

Posted in Faculty Publications on September 12, 2016